Women and Disabilities: Know Your Risk

You are here:
May 11, 2015Leave a commentProtect Your IncomeBy Council for Disability Awareness 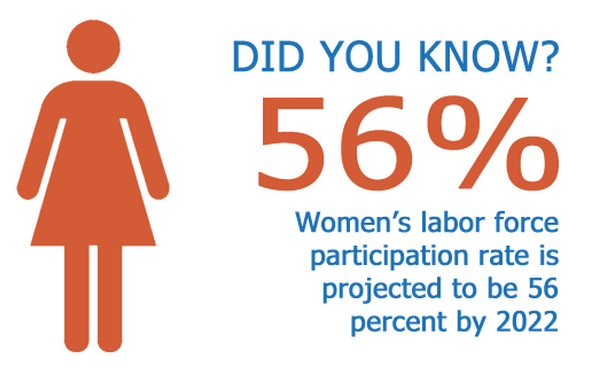 According to the U.S. Department of Labor, 57 percent of women participate in the workforce. And many of these women are increasingly important not just to running their own households, but to keeping families financially stable, as well.

The Pew Research Center reported that in 2013, “40 percent of all households with children under the age of 18 include mothers who are either the sole or primary source of income for the family.” That figure includes both married moms whose income is higher than their partner and single mothers– not surprising, as women make up almost half of the labor force.

Despite these facts on women and disabilities, women often lag behind men when it comes to purchasing disability insurance.

A study by The American College, surveyed 1,600 women and found that 51 percent of females believe their chance of becoming disabled is less than five percent. Further, only five percent of women surveyed had done “careful research” on disability insurance and how it might help protect their income.

Women and Disabilities: A Perception Problem

Largely, the perception is that these illness and injuries which cause disability happen mostly to men.

But the truth is, women make up more than half of new long term disability claims.

Women are simply more likely to become disabled– this is especially true as they age. The American College study went on to say, “adult women experience higher incidences of disability than do adult men and the gender gap grows as the years progress.”

The risks are real and so are the financial obstacles women will face if they aren’t protected. Women and disabilities needs to be top of mind.

What Causes Disability for Women

What’s the biggest cause of these disability claims? Musculoskeletal problems, including back problems and arthritis—and unfortunately, though the reasons aren’t clearly understood, arthritis occurs more often in women than in men. Cancer is another leading cause of disability claims, as are injuries and cardiovascular issues such as strokes and heart attacks.

This can be especially important for families, as paid maternity leave is not mandated in the U.S., and often simply unavailable beyond a week or two of accrued sick leave.

As Dina Bakst, co-founder and co-president of A Better Balance, told ABC News in a recent story on maternity leave in the U.S., “For workers without paid family leave, taking time off to care for a new baby or a seriously ill loved one can have devastating long-term financial consequences, ranging from racking up credit card debt to raiding savings to bankruptcy.”

Knowing more about women and disabilities ranging from childbirth to cancer and mental disorders is one step toward making smarter financial decisions about income protection.

It Can Happen to Anyone

The truth about women and disabilities is, disability can strike anyone, anytime—and it will. One in four adults will be unable to work for at least three months due to a disability at some point before they retire. And most of us couldn’t pay the bills for very long without an income.

While there are things you can do to keep your body and mind in good health in order to help reduce your chances of a life-altering incident, injury, or illness that would cause you to be unable to work, quitting smoking isn’t enough to protect your income.

Thinking about the facts surrounding women and disabilities is important. All women need to take their financial security seriously and take the precautions needed so that if something should happen to you, your income—or your family—won’t be left in financial dire straits.

Image via U.S. Department of Labor

arthritisfamily leaveFMLAmaternity leaveodds of disabilitypaid leavepaid maternity leavewomen and disabilitieswomen at workwomen with disabilityworking moms
Related posts
Four Methods of Budgeting That Will Help You Save Money
December 15, 2020
How Having a Chronic Illness Complicates Retirement
December 1, 2020
Hindsight is 20/20, Especially for Small Businesses
November 17, 2020
Leave Comment